Kina was awarded a 25% participating interest in PRL 38 on 29th November, 2013. The license comprises nine graticular blocks covering approximately 765 km2 and includes the Pandora gas discoveries which are estimated to contain 800 BCF of gas1. Kina’s share of this, approximately 200 BCF, doubles its global contingent gas resource.

The Pandora discoveries are located approximately 235km west of Port Moresby in the Gulf of Papua in water depths of approximately 120 metres. The gas fields are in the former PRL-1, which was initially awarded on 20 February 1998 for a period of five years and was subsequently extended for a further two 5-year periods before expiring in February 2013.

The Pandora A structure is a 290m high Miocene-age reef build up. Top of the gas column was encountered at 1,392 m TVD. Pandora A was tested at 57MMscfd. Pandora B accumulation is a 110m gas column that was drilled in 1992 and tested at 43MMscfd.

The PRL 38 licence obligations include further geological and geophysical studies, development and commercialisation studies and the drilling of a well during the licence term. These work commitments reflect the Joint Venture’s intent to develop the existing and potential future gas resource. Kina’s annual share of the firm commitments for the first four years is considered to be easily manageable. Exploration upside exists within PRL 38 including A and B reefs and a further 7 undrilled prospects in the vicinity of the discoveries. Potential development options for Pandora gas may include:

In the event of a change of strategy by any of the Joint Venture participants, KPC is well placed to build its position and further influence the development options for PRL 38.

1 Based on the most recent publically available 2C contingent resource estimate, as published by Oil Search in its 2012 Annual Report and who at that time held a 24.09% interest in the Pandora resource.

2 Barracuda Limited is a subsidiary of Santos Limited. 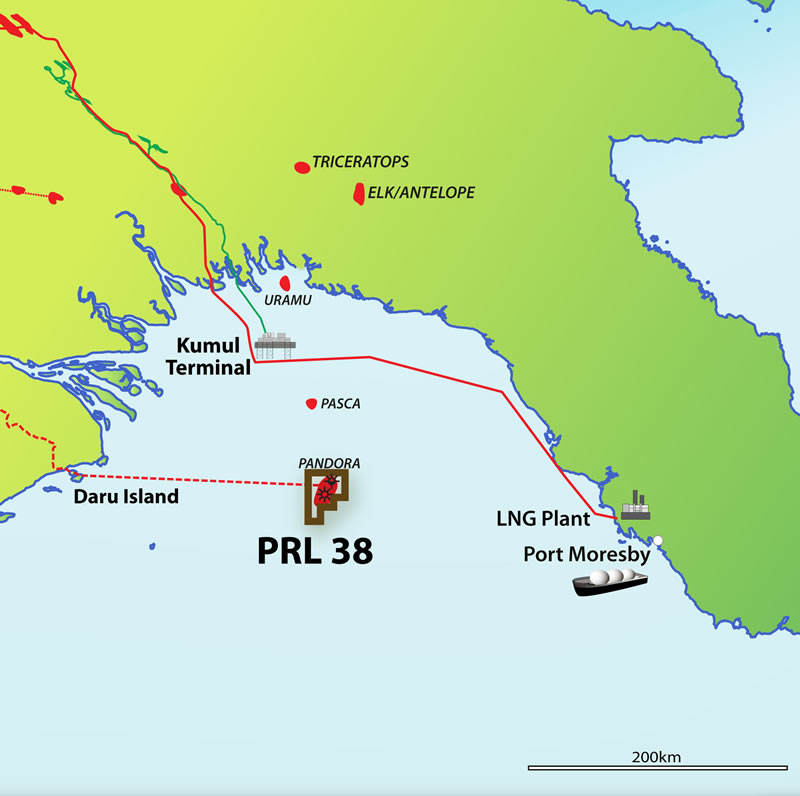