The participants in PRL 21 are:

PRL 21 is located close to existing port and shipping infrastructure between the Strickland and Fly Rivers. The Fly River is navigable to ocean going barges to the coast and beyond(Fig 5.3). Ok Tedi Mining Limited has a major export facility at Kiunga.

PRL 21 is located in the Foreland of the Papuan Basin with upwards of 3 kilometres of clastics, coals, limestones and shale overlying the uppermost reservoir sandstone, below the Ieru shale which is gas bearing in PRL21.

To the north lies the Ketu Structure, which is a fault bounded horst block. Ketu-1 intersected a similar section to Elevala 1 with gas deeper in Elevala Sandstone. The Toro and Imburu sandstones were water bearing.

Seismic exploration began in 1969 with Kiunga-1 drilled in 1980. Toro Sandstone was intersected and although salt-water bearing, encouraging oil shows were seen.

In 1987 Santos acquired the area and recorded seismic data over Elevala and Ketu in 1989. British Petroleum drilled Elevala-1 and Ketu-1 wells in 1990 under a farm-in agreement with Santos.

Santos carried forward exploration in the area by drilling Stanley-1 in 1999, which discovered gas-condensate in the Toro Sandstone. Post relinquishment in 1999 by Santos the Stanley discovery was preserved as PRL 4 and, effective 14 February 2000, Elevala and Ketu as PRL 5.

PPL 10 has been issued to Horizon Oil Limited, Talisman Energy Inc and Mitsubishi. Talisman is operating the development with development drilling completed.

2 seismic surveys on the Elevala, Tingu and Ketu structures were completed in 2011 and 2014.

Appraisal drilling commenced with the drilling of Elevala-2A in late 2011, located to the west and down-dip from the crest of the Elevala sandstone in Elevala-1. Elevala-2 raised the northern flank of the structure and Elevala 2 confirmed the gas water contact of the field.

A PDL application was submitted in March 2014. 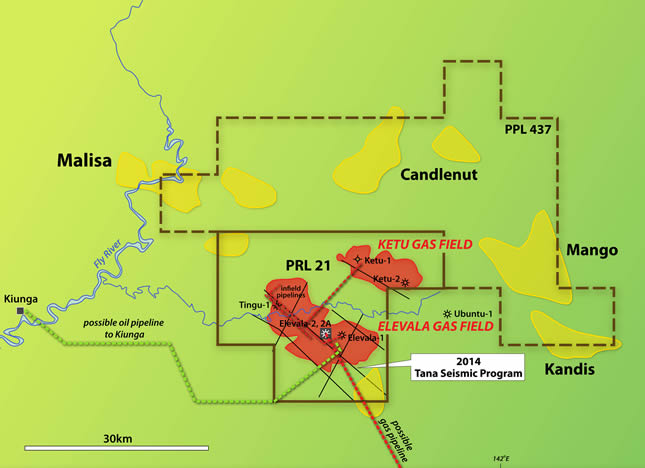