PPL 340 covers an area of 4,212 km2 onshore and is located within the Eastern Papuan Basin in the Gulf and Central Provinces and extends into the National Capital District. The licence comprises a contiguous area of 43 graticular blocks running from Port Moresby to the northwest. The balance of the licence comprises a single graticular adjacent to PPL 339, 6 graticulars east of Kerema and an isolated pair of graticulars north of the main body of the licence.

It is adjacent to the capital Port Moresby, the PNG LNG project site and the Puma (formerly InterOil) Refinery. Access to Port Moresby and proximity to the coast and plant sites may enable economic development of modest sized discoveries in this area.

A fairway of good quality late Cretaceous reservoir is interpreted from outcrop of the Pale Sandstone in PPL 339 to the Barune Sandstone outcrop in Port Moresby. A carbonate reef play is viable with Eocene reefs proximal to PPL 340 as well as within the Early Miocene (Fairfax and Boera Formations) and the Plio/Pleistocene (Wedge Hill Limestone). Offshore PPL 340 Kapuri 1 (1968) tested water at a rate of 2,640 to 4,800 BWPD from the Kapuri Limestone.

An active hydrocarbon system is supported by: Gas in Oroi 1, gas flows from Tovala 1A, oil shows within the Oiapu bores, oil recovery from side wall cores at Iokea 1, gas shows in Wedge Hill Limestone at Black Bass and indication of thermogenic hydrocarbons in the recently suspended Wahoo-1.

No data has been located for the only well drilled in PPL 340, Rorona 1. Most wells and bores are pre-1950 with limited seismic data coverage but recent drilling activity by InterOil include Black Bass 1 and Wahoo-1.

Exploration focus is on possible reef trend extending from the north of Oroi-1 into PPL 340. This will require new seismic acquisition in an area of relatively easy access. Aeromagnetic and aerogravity data has been acquired in advance of this. 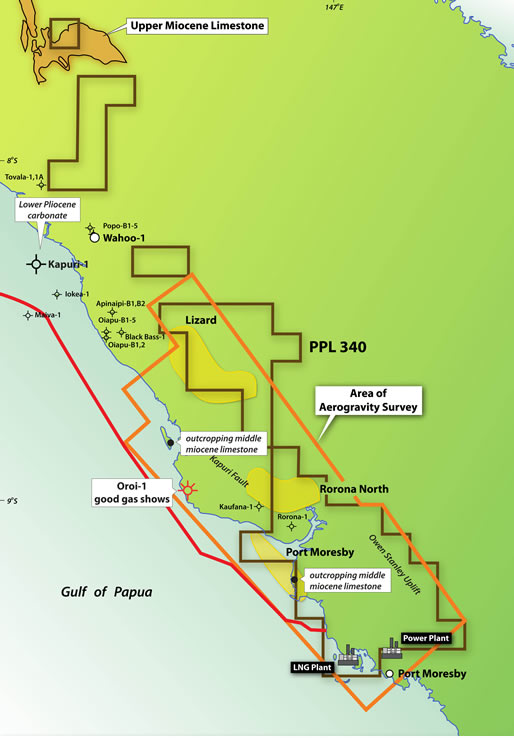