PPL 338 covers an area of 3,159 km2 onshore Gulf Province within the eastern Papuan Basin. The licence comprises one large southern block of 30 graticular blocks (2,430km2) appended to the Uramu PRL and 3 smaller blocks in the north comprising 3 graticulars each. PPL 338 is near Elk-Antelope gas discovery in PRL 15. The structures interpreted in Kina’s two PPLs are analogous and on trend with several of the recent discoveries made by InterOil.

PPL 338 is well located to existing infrastructure being approximately 75 km southeast of the Gobe oil fields, 30 km west of the giant Elk/Antelope gas discoveries, close to the town of Kerema and is 280 km north-west of Port Moresby.

It is about 30 km east of the Oil Search’s oil export pipeline and Interoil’s planned Elk/Antelope export facilities will traverse its eastern border area.

The entire area of PPL 338 is covered with a thick blanket (between 2 to 5 kilometres) of non marine to marginal marine ill-sorted clastics (silts, clays, some sandstones and minor coals). Primary exploration targets are the Miocene and Eocene reef reservoirs sealed by the overlying Pliocene mudstones (Orubadi Formation) .

Success at Elk/Antelope (2006-2013), and Triceratops (20xx) located only 30 km to the north east of PPL 338, confirmed the viability of the Eocene and Miocene limestone reef play. Most recent success by Interoil at Triceratops encouraged the PPL 338 Joint Venture to investigate a possible extension of the Triceratops discovery into northern PPL 338. PPL 338 is on a reef carbonate fairway running from Pandora in the south through Pasca, Uramu and continues up to Elk/Antelope and Triceratops.

This Upper Miocene reservoir has not been tested in PPL 338 and the Mangrove closure is currently mapped at approximately 300 sq km. Carbonate build ups within the upper Miocene are supported by recent Strontium isotope analysis. At Mangrove, top reservoir may be as shallow as 800m below surface with vertical closure over 200m. A full appraisal of Mangrove will be finalised upon completion of the seismic reprocessing of the PPL 338 data in Q1 2015.

Nipa is a large mapped closure of up to 170 sq km between Mangrove to the north and the Uramu gas field to the south. Nipa is believed to be on trend with and analogous to the nearby Uramu and Mira structures. Uramu -1 (1968) intersected gas in a Miocene carbonate at a depth of 1860m and flowed gas at rates up to 24.4 MMSCFPD.

Mira-1 (1972) intersected upper Miocene carbonates at 1643m with high gas readings recorded in both the Pliocene clastic section and carbonate. A DST of the carbonate at 1646m flowed gas cut water at a rate of 1620 bbl/day. Kina’s interpretation has Mira at the limit of the Nipa closure with a vertical relief of up to 690m and top carbonate at 1160m. Seismic reprocessing of data over the Nipa prospect will commence in Q1 2015.

Early gravity data (1940s and 50s) identified the Wana Swell and caused the Wana-1 stratigraphic test (1950) to be drilled. Wana-1 flowed from the Eocene limestone 18,000 barrels water per day (bwpd) and confirmed the presence of good reservoir. Offshore 10km south of PPL 338, Uramu-1, 1A (1968) discovered gas within the Miocene reefal sequence.

About the same time Iviri-1 (1965) and Ini-1 (1969) wells were drilled onshore to test seismically controlled reef traps and although dry they confirmed good porous and permeable zones within Eocene and Miocene carbonates.

The Company is in possession of data from 9 seismic surveys (dating from 1959) that traverse PPL 338 and data quality is generally good. Reinterpretation of existing seismic data identified a reef trend with up dip potential south and east of Iviri 1. This has been followed up with 57km of seismic acquisition over the Nipa Prospect. Nipa remains a target but further seismic data is required to confirm separation between Nipa and Ini-1. 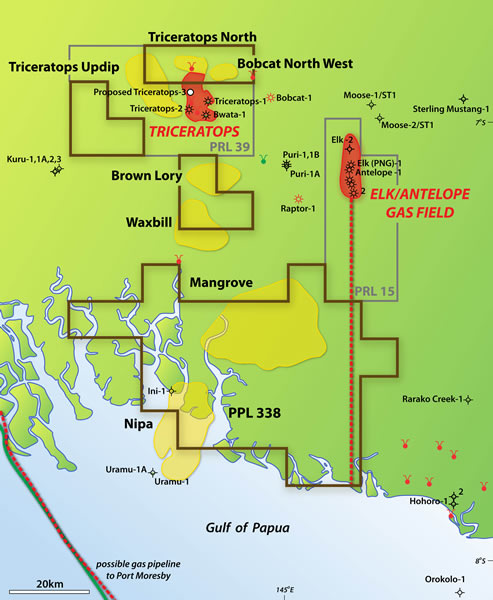