The first term of the licence expired in September 2015. Oil Search, as operator, applied for an extension and this is expected during 2018.

In the north, terrain is mountainous and can be accessed by road from Lae and Goroka. Kerema located on the Gulf of Papua coast is within PPL 339. Port Moresby is accessible via the Hiritano Highway. The near-coastal areas are well timbered and logging tracks provide some access into the hinterland.

Regionally the Aure Beds (up to 3km thick) form an effective and regionally extensive seal over the Mendi Group carbonates.

Previously drilled Hohoro-1 and Upoia 1 are located on or near previously recorded seismic lines in southern PPL 339. This seismic data supports the presence of an uplifted basement block which may extend from Elk /Antelope in the northwest through PPL 339. Kina believes that a reef carbonate fairway may run from Elk/Antelope to the southeast with Eocene through to Miocene carbonates interpreted to extend into PPL 339 along this high trend.

Late Cretaceous sandstones beneath the aforementioned carbonates form a viable secondary reservoir target throughout the southern part of the license.

Numerous oil and gas seeps in PPL 339 attest to an active petroleum system operating in the block. These seeps have been sampled during 2013 for geochemical analysis. Interestingly biodegraded oil was sampled from the old Upoia bore.

Early exploration commencing with Kariava-1 (1941) was undertaken without the benefit of seismic data. Early wells failed to intersect a viable reservoir target due to structural complexity.Tovala-1 and -1A (1969), drilled with the benefit of seismic reached a depth of 3206m in Mid Miocene section, recorded gas flows from sands within which were fragments of reworked Eocene reefal limestone. InterOil’s seismic data over Elk Antelope is generally of good quality and successfully delineated the giant Elk/Antelope Field (2006 to 2010) which is located 15km from the PPL 339 boundary. The Wulai Seismic Survey of 38 line km was acquired in 2011 the Talis and Okari gravity gradiometry surveys were acquired in 2013.

Subsequently Oilsearch carried out a second gravity gradiometry survey over the southern block and a phase 2 Wulai Seismic Survey.

The numerous oil and gas seeps make this area a highly prospective corridor. 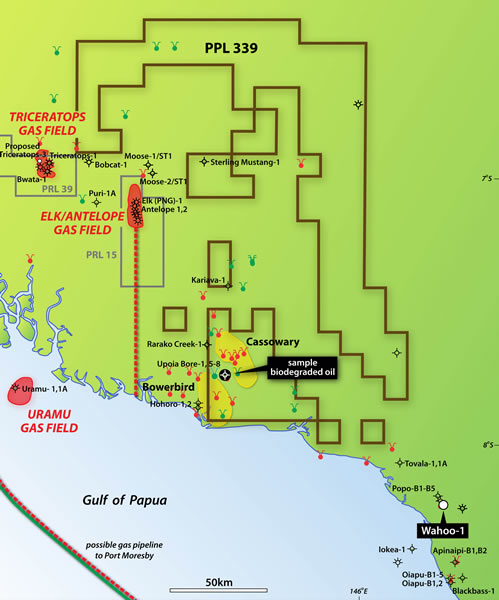